The table below provides details of the movement in average investment returns from various asset classes for the period up to 31 August 2019.

Past performance is not a reliable indicator of future performance. The Global Listed property reference index changed to FTSE EPRA/NAREIT Developed Rental NR Index (AUD Hedged) as of August 2019

Recession risk continues to increase, and the actions of the US President are not helping. Escalating the trade war through further increases to tariffs and sledging of his own Central Bank are causing concerns in market both in the US and more broadly. Trump finally recognised the impact of tariffs, although he would probably deny this, when he said that he was delaying some tariffs until December 15 that were scheduled to come into effect 1st September. He said this was, “Just in case some of the tariffs would have an impact on U.S. customers.”
In a rather contradictory series of statements Trump said that the economy is doing “tremendously well” and then just a day later suggested that the US Fed should cut rates by 1% “over a fairly short period of time” and resume QE by buying bonds to reduce.
In the UK the extraordinary event that is Brexit; the new Prime Minister decided to suspend Parliament from the 10th of September to the 14th of October in what was expected to be a critical time for Brexit. Further news just as we write this report, brings another interesting turn with Boris Johnson losing two votes, a vote on No Deal Brexit and then a vote to go to a general election. The reality is changing Prime Minister was unlikely to change the parliament’s appetite for a no deal Brexit nor Europe’s willingness to allow the UK to exit and retain many of the
benefits of the union. However, something must give at some stage but what the UK Prime Minister can do now to break the impasse is not clear.
In Europe, weakness in Germany with a 0.1% contraction in the June quarter could well be followed by a contraction in the current quarter given the softness in a range of indicators such as manufacturing with the PMI at 43.5 as of August and inflation at just 1.4%.
The reality is that economic conditions are deteriorating in the US and more broadly around the globe. A series of economic indicators show this and the likelihood of a recession as measure by the Federal Reserve Bank of Cleveland quite clearly demonstrate that risks are rising.
US recession Probability

Source: Bloomberg, AMP
In Australia, conditions are also weakening on the back of global softening and the US-China trade war. Weakness in construction, building approvals and credit growth all point to a slowing economy.

Global economic weakness and further uncertainty around the US-China trade war and Brexit with a little political unrest in Hong Kong all combined to push down growth assets through the month. It was a broad-based sell-off of growth asset as investors moved to more defensive assets.
International shares lost 1.9% during the month on a currency hedged basis. In Europe shares were a little better only falling 1.3% however there were heavier falls in both Germany (-2.1%) and the UK (-4.1%) as economic conditions and the political mess in the UK had an impact in their local markets. Emerging markets were also weaker down 2.7% on an unhedged currency basis for the month.
The Australian market was in the thick of reporting season in August with soft earnings coming through that were exacerbated by a change in the accounting standards in relation to the treatment of leases. Earnings growth across the market was a lacklustre 1.5% well below the consensus expectation of 2.0% - this was supported by strong growth in resources which saw 13% growth as compared to the rest of the market which saw earnings decline by 2.0%.
According to FactSet FY19 earnings misses greatly outnumbered earnings beats, and downgrades to FY20 earnings estimates significantly outnumbered upgrades. Analysts cut FY20 EPS growth forecasts for the index by an average of 250bps, with most noting further downside risk ahead.
Australian profit results relative to market expectations % of results 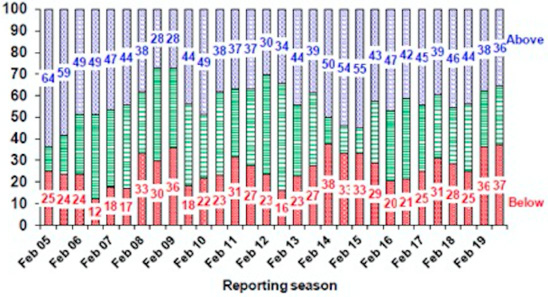 Source: AMP Capital
Companies announced more cuts to dividend than has been seen in many years with those increasing their dividends being very low compared to recent history.
Australian dividends relative to a year ago 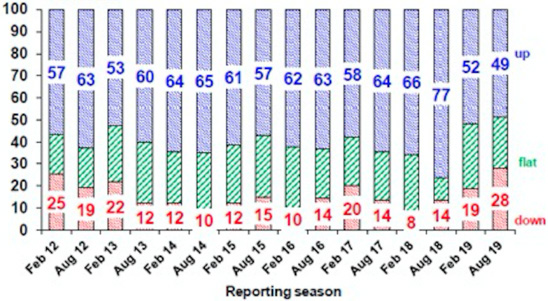 Source: AMP Capital
In August the reporting season combined with the economic and global issues to drive Australian shares down 2.4%. Health care which saw double digit growth in the reporting season was the best performing sector (3.6%), Info Tech (0.3%) with Consumer discretionary (+0.2%) were the only sectors to generate a positive return in August. The weakest sector was Materials (- 7.5%) as weaker than expected result combined with weakened commodity price outlook. Similarly Energy (- 5.6%) was down significantly over the month and Telecoms (-4.5%) was also among the weakest sector.
The best performers in the S&P/ASX 100 were Lendlease (19.3%) which reported EPS growth for the half of 28%. Afterpay (15.9%) with strong income growth reported not withstanding a significant increase in the net loss. Wisetech Global (15.6%) which saw EPS growth for the half of 26% Amongst the worst performers was Iluka (- 25.7%) as mineral sands revenue fell 10.1% in the first half with some weakness in the outlook. Worley (-23%) with the company noting that its markets are being challenged by macro uncertainty. A2 Milk (-20.9%) despite reporting strong EPS growth of 47% for the year.

Bonds performed well as investors moved to more defensive asset amid the concerns. Domestically the Australian 10-year yield fell 31 basis points to new record lows finishing at 0.89%. This drove Australian fixed interest up 1.5% for the month.
In the US the 10-year yield was down 51bps to 1.50%. assisting global fixed interest to outperform the local market gaining 2.2% for the month.